Another El Niño is Likely on its Way!

Another El Niño is Likely on its Way!

A winter return for El Niño?

It’s been a few years since one reared its ugly head, but from what forecasters are seeing in and above the Pacific Ocean, there’s a good chance El Niño will be back for this coming winter.

As such, the El Niño Watch issued by NOAA forecasters remains in effect.

Whenever we talk about an El Niño developing, the discussion turns to the obvious question – how strong will it be?

Throughout 2015, we saw the development of a ‘super’ El Niño – which is now considered the strongest El Niño on record, even stronger than the infamous El Niño of 1997-1998.

The strength of an El Niño is ranked based on how warm it gets in the surface waters of the central equatorial Pacific Ocean, compared to the normal temperatures measured there. If the waters in this ‘Niño 3.4’ region reach just half a degree (0.5°C) above normal, at least, for a period of three months, this is the breakpoint for what forecasters consider to be El Niño conditions.

Since it takes some time for changing conditions in the central Pacific to spread their influence to elsewhere in the world, forecasters wait until they see three (3) consecutive three-month periods where Niño 3.4 temperatures are above that breakpoint, before they state that an official El Niño is in progress.

The higher that Niño 3.4 temperature anomaly goes, and the longer the conditions persist, the more extreme the El Niño is.

In 2015, the super El Niño peaked even higher, at +2.6°C in the Niño 3.4 region, and temperatures there were above the El Niño threshold for 19 three-month periods – from October-November-December of 2014, all the way until April-May-June of 2016.

According to the latest collection of computer model runs, rather than another ‘super’ El Niño, we will likely see a ‘weak to moderate’ one, where temperatures in the central equatorial Pacific could reach between 0.5°C and 1.5°C above normal.

Forecasts are issued on a monthly basis, so this may change – going weaker or stronger – so watch for any updates to come.

WHAT IS EL NIÑO?

El Niño, the warm phase of the El Niño-Southern Oscillation (ENSO), is a regular climate pattern that develops along and above the equatorial Pacific Ocean.

Normally, conditions in that part of the world see strong trade winds, blowing east to west, which push warm surface waters along with them, causing them to ‘pile up’ around Indonesia and northern Australia. Periodically, these trade winds weaken, and the whole system ‘relaxes’, allowing those warm waters to slosh back towards the central and eastern equatorial Pacific. This arrival of warm waters off the coast of Ecuador and Peru typically happened in late December, and thus the pattern was named El Niño, or The Child, in reference to Christmas. This occurs roughly every three to five years, and individual El Niño events are separated by periods of normal (or ‘neutral’) conditions, or by cold La Niña patterns, which have a similar pattern to the normal conditions (warm in the western central Pacific and cool in the east), but ramped up to more of an extreme.

When an El Niño develops, all that warm water sloshing back towards the east changes the weather patterns over wide regions of the planet. Typically, it means a warmer winter for parts of Canada, as the added heat shifts weather patterns over and around North America further north and east for the duration of the event. 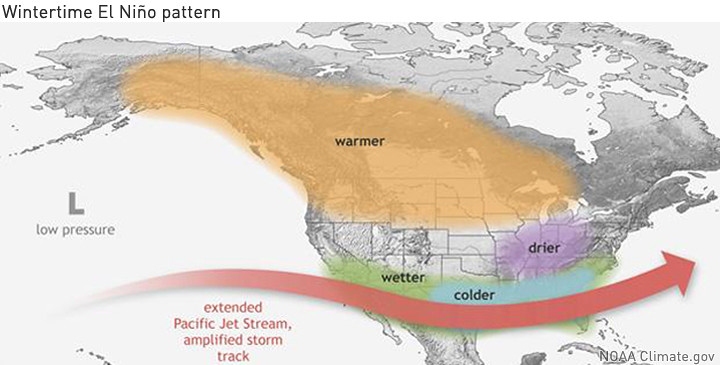 The typical effects of an El Nino on wintertime across North America. Credit: Climate.gov

The effects of each El Niño are different, however, as stronger or weaker patterns have a greater or lesser impact on the weather, and other large climate patterns (such as the North Atlantic Oscillation) exert their own influences.